Art for All: Socially committed art, 1930s to the Cold War 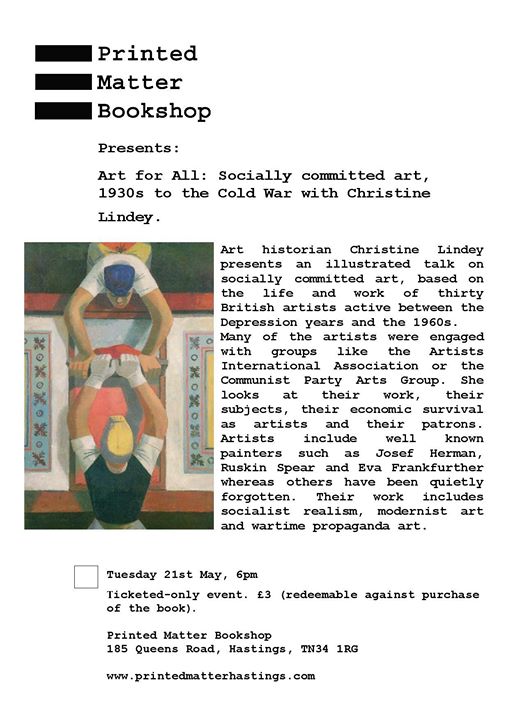 Art historian Christine Lindey presents an illustrated talk on socially committed art, based on the life and work of thirty British artists active between the Depression years and the 1960s.
This event will take place in the basement of the shop as there will be visuals.
Ticketed-only event. £3 (redeemable against purchase of the book). Tues, 21st May 6pm PM Bookshop, 185 Queens Road, Hastings, TN34 1RG.

Many of the artists were engaged with groups like the Artists International Association or the Communist Party Arts Group. She looks at their work, their subjects, their economic survival as artists and their patrons. Artists include well known painters such as Josef Herman, Ruskin Spear and Eva Frankfurther whereas others have been quietly forgotten. Their work includes socialist realism, modernist art and wartime propaganda art.

Short Biography
Christine Lindey was educated at the Courtauld Institute and was previously an Associate Lecturer in Art History at Birkbeck College, University of London and at the University of the Arts, London.
Art for All: British Socially Committed Art, from the 1930s to the Cold War, is her fifth book.
Her third and most influential book so far, Art in the Cold War: from Vladivostok to Kalamazoo (1990) pioneered the comparative study of Soviet and Western art, and is now on numerous university reading lists.
She has been writing visual arts reviews for the Morning Star since 2006. ( She prefers not to have a website).