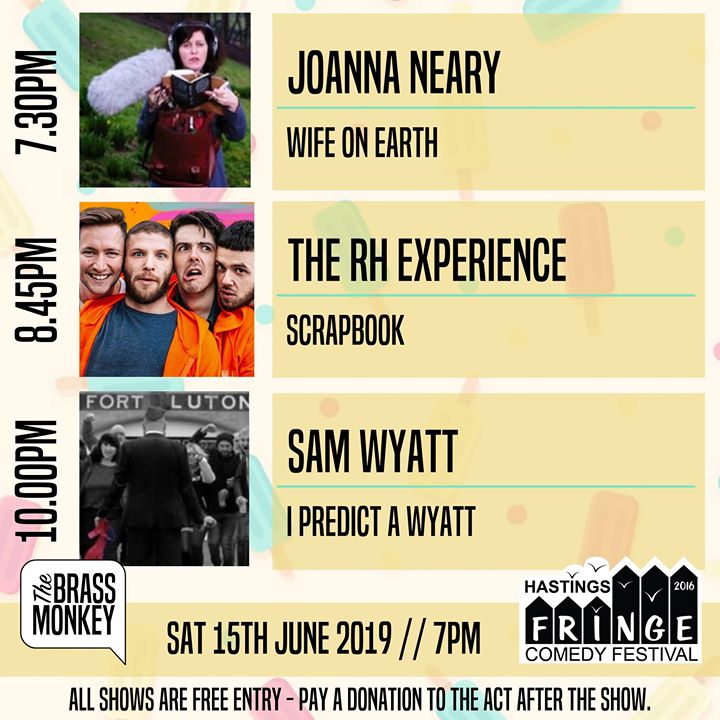 Joanna presents her latest live comedy magazine show, which travels about in time and space, in search of the secrets to living a good and fulfilled life, presented by housewife Mrs Celia Jesson. ‘That was a report from Onion (pronounced Sharn) Williams, lady mayor, from 1919. Still to come, we’ll be hearing from a man in Daventry, who thinks that Mars Bars are not only getting smaller, but also wider and meeting a hang gliding vicar whose sermons really do ‘take flight.’ Award-winning comedian Joanna Neary’s much-loved alter-ego, repressed housewife Celia presents a comedy show examining relationships in history, packed with original characters, true stories, and stand up, starring guest Bjerk on disastrous dates.

The RH Experience are back in Hastings with their new show Scrapbook. Completely improvised sketches and songs imbued with their own brand of anarchic silliness & bizarre storytelling.

The RH Experience have been performing live shows & producing sketches for over a decade, performed at Glastonbury and Latitude Festivals, Edinburgh & Brighton Fringes, and have featured on BBC One, BBC Radio 4 & E4.

“The RH Experience are not the pioneers of tomfoolery: they are the masters”- Three Weeks ★★★★★
“A masterful, magical adventure from truly gifted improvisers” – JokePit ★★★★★
“Their sheer amount of brainpower and comedic instinct led to hilarity” – TenEighty Magazine ★★★★★
“Absurd and tear-inducingly funny” – Broadway Baby ★★★★
“Colourful, witty and dynamic” – Mumble ★★★★

Sam Wyatt: I Predict a Wyatt !

Sam Wyatt is recording the pilot for his new Saturday night Gameshow ‘I predict a WYATT!’ But with so much on the line will he be able to keep it together? 2 contestants, four games and only one host “I predict a Wyatt!” is a well-polished cheesy grin game show with all the hallmarks of a Saturday night gameshow for all the family! However what goes on off camera certainly isn’t! ^^A warm up act that doesn’t show, a mother as a director, a tec that doesn’t know his arse from his elbow and one host who is trying to hold everything together whilst his last chance falls into chaos around him.

“Don’t take my word for it ….. listen from regulars at Much Laughter’s comedy nights;”Amazing night with Sam with non-stop laughter from start to finish. My sides were still hurting the following morning from laughing so much”

“OMG what a funny night….. Sam Wyatt that was brilliant” “Ripped the Roof Off!” Notts comedy review

​Free entry to all shows – pay a donation to the act after the show.