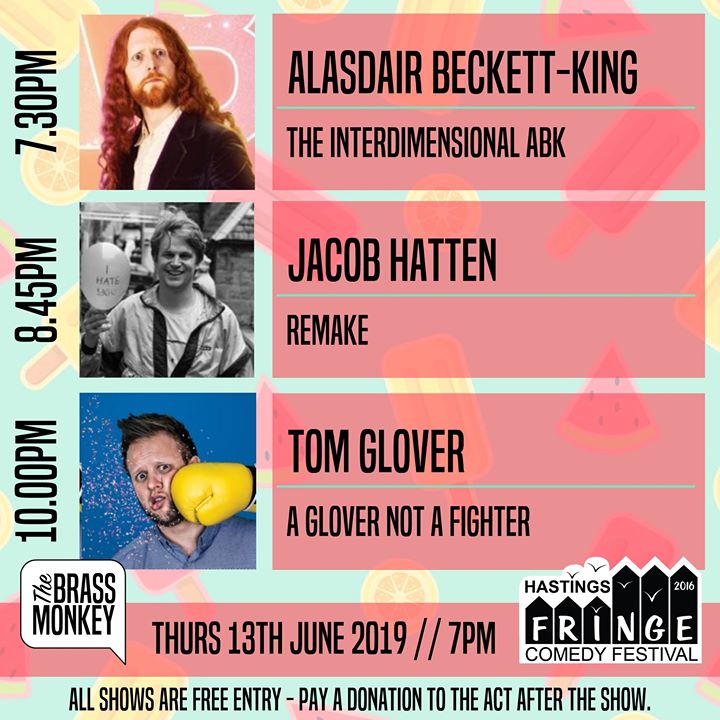 The multi-award-winning Alasdair Beckett-King returns to this timeline with a dimension-hopping stand-up comedy show. Is a better world possible? Yes, but you don’t live there. ABK makes the best of a bad timeline in this ramshackle jaunt through a multiverse of wonders. Also, Winston Churchill performs the best of Queen. “A singular and truly distinct act” **** (The Scotsman). ***** (EdFestMag) **** (One4Review). **** (Fest) **** (Voice) **** (Three Weeks)

Jacob Hatton tries to make sense of our world by remaking your favourite stories, the world and himself (with no respect for the originals) in a blistering hour of adventurous, hypnagogic stand-up. Those who cherish tradition, beware. Those who want a bloody good laugh, do not miss. As heard on BBC Radio 4 Extra, Soho Theatre Young Company.

Tom Glover: A Glover not a Fighter

Lactose intolerance. Bike rides. Urinals. Tom Glover is a comedian not afraid to tackle the big issues, In this debut hour, award winning comedian, ‘What did he win? It doesn’t matter. I’ve never heard of him? He’s not from round here’. Award winning comedian Tom Glover will attempt to find the humour in his life as a man desperate to to the right thing in the world where everything is wrong to someone.

Free entry to all shows – pay a donation to the act after the show.