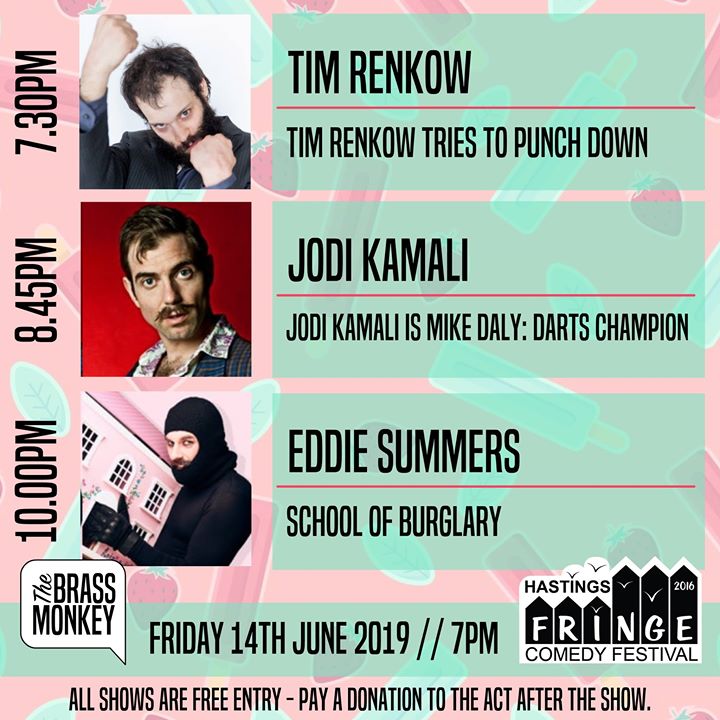 Tim Renkow is a crippled, redneck, Mexican Jew. It’s hard for him to find a group he is not allowed to make fun of, which is insulting. In a world increasingly running on the fumes of hate and discrimination Renkow is taking on all comers in this searingly honest show. Checking his own privilege at the door this straight talking stand-up is about the big conversations. Racism, religious persecution, and babies: nothing is off the table in this bitingly frank hour.

Join Tim as he tries to find a group that is off-limits and prove that he’s not the bottom of the social ladder.

Star of hit comedy series Jerk (BBC), A Brief History of Tim (BBC) and Bobby and Harriet Get Married (Viceland).

A former Bristolian Darts Champion frustrated by his fall from grace is back to tell all. Set at a dysfunctional Q & A event, it sends him on a journey of self-discovery that has idiotic consequences. An off-beat physical/character comedy show from the cult internet star and fringe regular. “Hugely inventive, warm and engaging” (Total Theatre) “Brilliant, original visual comedy” Harry Hill.

Free entry to all shows – pay a donation to the act after the show.