The Story Of The Blues – Avanti Charity night 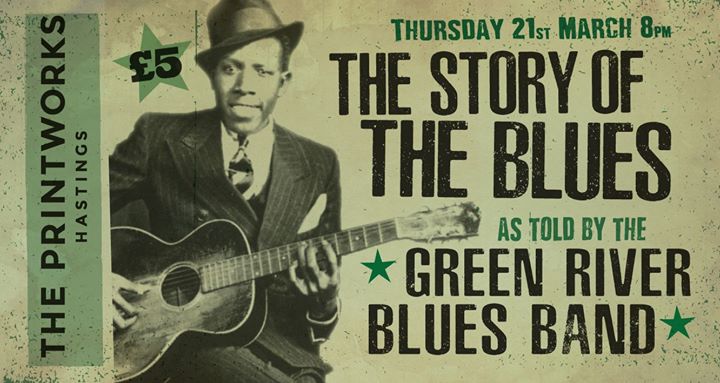 THE STORY OF THE BLUES – is a multimedia event featuring a narrator, archive film footage and photographs accompanied by live music from the Green River Blues Band. The story is told chronologically from the early 1800s, through slave field work songs, emancipation from slavery, segregation in the deep south, poverty and hardship, the Wall Street Crash followed by the Great Depression and later migration north from the delta towards Chicago and Detroit. How Chess Records sustained the Chicago blues scene and eventually spawned the London blues revival of the 1960s. Artists represented include Bessie Smith, Blind Lemon Jefferson, Son House, Robert Johnson, Leadbelly, Howlin’ Wolf, Muddy Waters, John Mayall, Eric Clapton, the Rolling Stones and many more.

THE AVANTI THERAPY CENTRE FOR ACQUIRED BRAIN INJURIES is a unit run in St Leonards offering therapy, support and counselling to patients who have suffered severe head injuries and their carers. Any profit made from our Story of the Blues night at the Printworks will be donated to the Avanti Centre. If you want to find out more about Avanti, check out https://www.avanti-abi.co.uk. Please support this worthwhile fundraiser event.